Parenting: I’ve learned that there are only degrees of failure. And that’s okay. 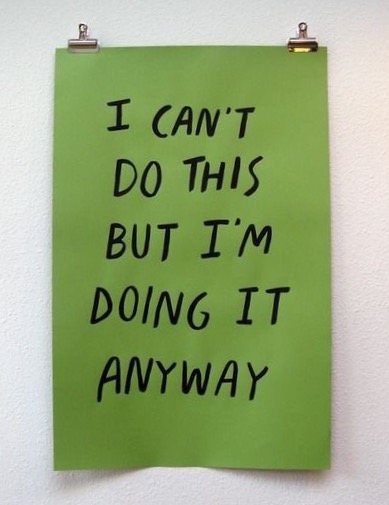 When I first became a mother, I was young. Not Loretta Lynn young, but young enough to still have a head full of delusions of grandeur and invincibility that only come with youth, or serious mental health issues or head injuries. At that time, it was my youth at play. Now, well, the jury is still out but the youth defence is out of the running. Since I wanted to be a mother SO badly, I just knew, no, really I KNEW that I would do everything right and that  my child would be totally amazing and surpass any of my wildest ambitions or aspirations for him.

I turned my nose up at ‘old ways’ of parenting. Let my baby cry? That’s barbaric! That’s abusive! Never! Force him to sleep in a crib, alone? Make him deal with it alone when he is very clearly sad, hungry, dreaming of monsters, gassy, teething, fussy, lonely, etc. Nope. That this better, smarter, mother. No. He was going to know that Mummy was there. That Mummy would protect him from *everything* bad, scary or painful and encourage and lead him towards everything healthy, good, smart and successful. No public school for my baby when it came time for kindergarten. He was too sensitive, gentle, clever, kind and the other kids would just ruin him. No way. Private school only. Single mother, constant university and college student, living in my mother’s basement, sending my child to private school, because he was THE BEST. There was no better boy or child anywhere. See? I told you, I was completely delusional.

And then the years past and I got married, puberty hit (him) and I moved us from Scarborough to Keswick. All in the same year. And KABOOM! Toss in a new-found interest in girls and all the other treats that come with hormonal changes in adolescent boys, and it sank my battleship. Like, totally and completely torpedoed that fucker. Granted, I was fairly unprepared for how all of those changes would affect all of us, especially my relationship with my son and his with me but still the world fairly imploded. And it no longer mattered that I had sent him to private school for all of those years. Or that I had enrolled him in art lessons, music lessons, rep baseball, swimming, martial arts, skating, etc. It no longer mattered that I fed him a healthy diet of fresh foods, little-to-no refined sugar, no artificial sweeteners, colours, additives or preservatives. It no longer matter that I paid three-times more for natural, organic shampoo than regular drugstore shampoo for him or that I breast-fed him for over a year rather than formula fed him. None of it mattered or made a bit of difference. Life as I thought it would be was no more. Humbling lessons to learn indeed.

Fast forward again and he is now only weeks away from turning 22 years-old, older now than I was when I gave birth to him. He is not at university and about to finish his last year with his degree in hand, nor is he away at college, and either of these two scenarios is where I thought we would be today and what I single-mindedly determined the plan to be in the beginning. No, it is not where we have landed and he is making his own path through life now. Whether I agree or disagree with his choices, whether I think that he should just listen to me and do what I say because I just fucking know better than he (being twice his age and all), just does not matter. He is going to be the person, the man, the partner, the friend, the son he chooses to be and I honestly believe that is the way it was going to be no matter how I parented him.

And now, with over two decades of parenting experience behind me and more decades of experience to come, I believe that is how it is with all children. We do our best. We make the best choices and decisions we can in the moment, with an eye to the future, with our hopes, dreams and ambitions for them in mind. We love them, we guide them, teach them, discipline them and care for them. We screw up, make mistakes, do or say things we regret, and we sometimes act in anger, even when we should know better. But at the end of the day, they will be grow into being the kind of people they are meant to be. Each and every one of them. Some will be doctors, lawyers, activists, or leaders. Others will be villains, lazy, shiftless, or deadbeats. And still others will be somewhere between the two extremes. Neither society superstars nor the dregs of society, but rather somewhere safely in the middle, you know, where most of us live. I mean, let’s face it, our world is not full of wonderful, motivated, helpful people, but rather it is a place with all types of people, good, neutral and bad and all of those people have parents. Just like we have and we now are. And we can no more take credit for our children who become doctors than we should carry the blame for the children who become villains. After all, can we reasonably blame or credit our parents for how we all turned out as adults or the choices we’ve made along the way? I know that I (sometimes regretfully) cannot.

Today, as an adult child, I honour the hard, sometimes (okay, most of the time) thankless job that my parents had raising me (and the job they still have parenting me, the over-grown baby that I am, although I try to thank them more now). Today, as a parent of an adult child, I love and cherish my grown child, not just for the child he was or the history we share, but for the man he is becoming. His life and future are in his hands and I am excited, interested, and terrified to see where his journey takes him. But I will always be here, in his corner, ready to offer him the benefit of my experience when he asks, guidance when he’s lost, and Tylenol when his head aches from the stress and pressure of ‘real life’ adulthood. ~Sigh. ????

Don’t forget to come and hang out with me on Facebook, Instagram or Twitter. Some posts or moments make it to all four sites, others only exist on the site I post them on, so make sure you’re not missing out on anything (rants, updates, cute moments and homicidal-like rages), like or follow along on those sites too. ????
~A

What is your on most eclectic mixed tape?

Combat-Mode Grocery Shopping and My Pathetic Need to Make Everyone Like Me (or at least pretend to).

Razor blades and adulting: The same but differ-, er no actually, they are the same thing.